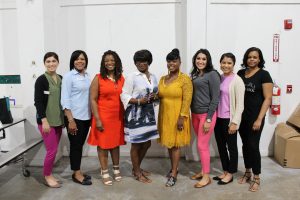 Elizabeth Bell is a teacher at the Rhodes School for the Performing Arts. Ms. Bell has made countless impacts on her students and strives every day to give them the tools needed to excel in life. She is a leader among her peers, always encouraging and mentoring others.

Many years ago, Ms. Bell had a pre-k student who wore leg braces and walked with a walker due to spina bifida. One day while out on the playground, the student expressed that he wanted to ride bikes and slide down the slide like the other children. Without hesitation, Ms. Bell worked with another teacher to help her brace the young student on a tricycle. While the other teacher helped the student balance, Ms. Bell knelt down on her hands and knees in front to help guide the student’s feet, so it felt like he was riding the bike on his own. Afterwards, she helped him to slide down the slide. When the student’s mother arrived to pick him up, the student was so excited to tell her what all he had done that day. As tears streamed down his mother’s face, Ms. Bell told her, “as long as I am his teacher, I will ensure that he has the same opportunities as his peers.”

This instance and many more is what makes Ms. Bell a deserving appreciated teacher. She has worked with many children ranging from those with physical disabilities, to those with autism, and always strives to make sure they are treated equally.

“I’ve never experienced a teacher of her caliber and undying dedication to the success of all her children,” said one parent. “She deserves all the recognition in the world because she doesn’t do it to be recognized.”