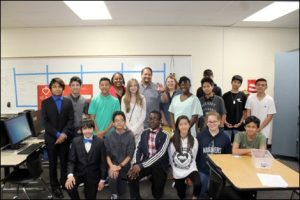 Richard Embrick is a Robotics and Engineering teacher at David Crockett Middle School in Fort Bend. Mr. Embrick has spent countless hours working with students before and after school, and spends his weekends at various robotics and coding competitions, near and far. His students describe him as extremely patient, fair, and nice.

Mr. Embrick created a robotics and engineering program at David Crockett Middle School that currently has over 300 students enrolled. The program teaches students how to design and 3D print, build and code robots, and how to work with circuits. Mr. Embrick has lead his students to compete at the University of Houston Mars Competition, Texas A&M University Competition, Future City NASA Competition, and Fluor competition. David Crockett Middle School is the only middle school in Fort Bend ISD with this type of program. Thanks to Mr. Embrick and his dedication, he is working to expand his program to the other campuses.

Richard Embrick was recently awarded the 2017 H-E-B Excellence in Education Rising Star Award, where he received $5,000 for himself and a $5,000 grant for his school. He was also named 2016 David Crockett Middle School Campus Teacher of the Year, 2016 Fort Bend ISD District Teacher of the Year, and the 2016 STEM Innovation Award. He has received over $75,000 in grant awards to help fund his program, and Mr. Embrick’s class has been featured numerous times in the Fort Bend Lifestyle and Homes magazine.

Mr. Embrick was nominated by one of his students, who said, “He gives our class many opportunities for success, but challenges us daily. Mr. Embrick is one of the best teachers ever!”