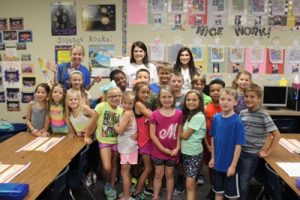 Stephanie Shaw is a second grade teacher at Kaufman Elementary in Conroe ISD. She was nominated by her husband, who said she is creative and goes out of her way to make learning interesting and engaging for the students. This was evident upon meeting Mrs. Shaw, who was in the middle of cleaning up her classroom, after she had transformed it into an actual campground for her lesson titled, “Camp Learned-A-Lot.”

Mrs. Shaw created a new organization at her school this year called the WAVE club. She has a group of students that she meets with twice a month, and they participate in random acts of kindness in their school and community. She has organized many activities for the students to participate in, including making blankets for cancer patients, the animal shelter, and the local women’s shelter, making shoes for children in Uganda, and collecting items to donate to a nearby hospital. The club’s motto is, “It only takes one act of kindness to start a ripple. Little ripples make BIG waves.”

Mrs. Shaw was chosen as 2017 Teacher of the Year for Kaufman Elementary. She is one of the famous, “Science Sisters” that has won the KHOU Inspiring Curiosity award two years in a row, and has been featured on the news several times promoting STEM education. Mrs. Shaw helped organize and coordinate Conroe ISD’s Elementary Science Festival for every elementary in the district, working alongside EFTA (Education for Tomorrow Alliance) and her fellow “Science Sister.”

Some of the words her students used to describe her were awesome, nice, and funny. It was clear that Mrs. Shaw is adored by her students, a feeling that is well reciprocated.